Birds of Prey in Bulgaria

We start from Sofia and our first destination on this tour is the Eastern Rhodope mountain, famous for its exceptional biodiversity, concentrated in a small area. The diversity of birds of prey here is amazing – 36 species of the 39 recorded in Europe. However, the most spectacular feature of the region is the colony of the Eurasian Griffon Vultures, inhabiting the crater of an ancient volcano. Eurasian Black Vulture, Egyptian Vulture, Golden Eagle and Black Kite are also frequent visitors of the feeding tables.

Next come the Sakar Hills – the stronghold of the Eastern Imperial Eagle population in Bulgaria. The Sakar is a low mountain covered with broad-leaved forests and steppe-like grassland with scattered trees, bushes and agricultural land. Some of the rivers form steep valleys with beautiful cliffs. Most of the known Eastern Imperial Eagle nests in the country are here. In the Sakar Hills we will be looking also for the Lesser Spotted Eagle, Booted Eagle, Black Kite, Long-legged Buzzard, Masked Shrike, Olive-tree Warbler, Eastern Orphean Warbler, European Roller, European Bee-eater, Ortolan Bunting, Black-headed Bunting. In the foot of the Sakar Hills we will visit one of our best sites for observing the Levant Sparrowhawk.

Our tour continues with a drive to the Southern Bulgarian Black Sea coast with stops in the agriculture lands between the Sakar and the Western Strandzha Mountain, where the Montague’s Harrier regularly breeds.

In the next two days we will explore the Bourgas wetlands and the surrounding forests, shrub and grasslands areas. The city of Bourgas lies at the centre of a complex of extensive wetlands that form one of Europe’s richest bird areas. The numbers of soaring birds following the Black Sea coastal flyway in spring and autumn can rival those at the Bosphorus or Gibraltar – endless flocks of thousands of storks, pelicans and raptors pass overhead.

While in the area of Bourgas we have some chances to observe the Red-footed Falcon.

Then we transfer to the Central Balkan Mountains with some stops on the way for birding and lunch. The Balkan Mountains range, that crosses the whole territory of Bulgaria from west to east, is characterized mainly with its extensive beech and conifer forests, mountain meadows and enormous rock formations. This site is one of the wildlife-richest parts of Bulgaria. The birds we expect to see there include: Golden Eagle, Northern Goshawk, Eurasian Sparrowhawk, Water Pipit, Ring Ouzel (ssp. alpestris), Whinchat, Eurasian Bullfinch, etc.

Transfer to Sofia and end of tour.

If you wish to join one of our scheduled Balkan Specialties Birding Trips, please check the availability. Prices for bigger groups – to be agreed;

The prices include: transfers from and to Sofia Airport, transport with a spacey vehicle, accommodation in  en-suite double / twin room in middle-standard hotels/lodges, all meals, guiding, entrance fees in the protected sites. 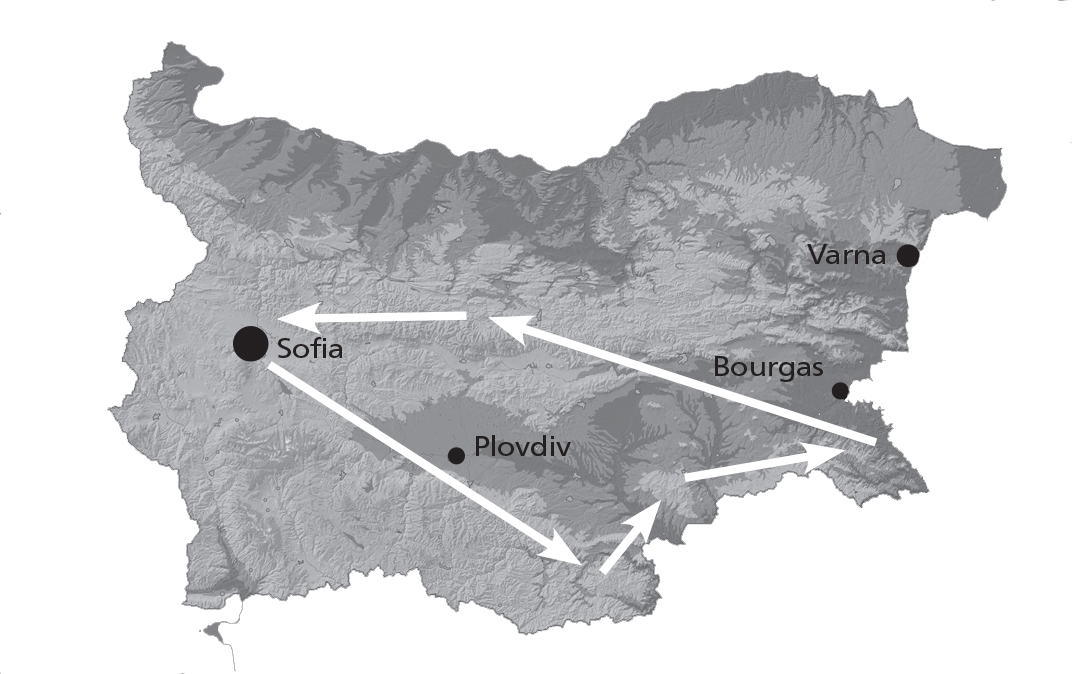 Day 1
Transfer to the Eastern Rhodopes with a stop at the Pazardzhik Hills;

Day 2
A whole day in the Eastern Rhodopes;

Day 4
We spend most of the day in the Sakar Hills;

Day 5
Transfer to the Southern Black Sea coast with stops for birding between the Sakar and the Western Strandzha Mnts.

Day 6
Birding in the wetlands around Bourgas;

Day 7
Transfer to the Central Balkan Mountains with some stops for birding;

Afternoon – 2 hours transfer to Sofia, where we will finish the tour