After the unusually warm weather at the end of 2015, the cold spells finally reached Bulgaria with the New Year. A large number of waterfowl and other birds arrived from the north to find refuge in the northern Bulgarian Black Sea lakes Durankulak and Shabla.
During the bird census carried out by a team of the Wildlife Conservation Society and Neophron Tours on January 2, 2016, we established 6980 Red-breasted Geese (of which 5830 in Durankulak and 1150 in Shabla lake) and 2025 White-fronted geese ( 1205 in the Shabla lakes and 820 in Durankulak). We also observed 11 Greylag geese, traditionally wintering in small numbers in the two lakes. All of the observed geese had roosted on the lakes.

We were impressed by the large flocks of other wintering waterfowl in both lakes, and particularly in Durankulak, where we observed 15 500 Coots, 9700 Mallards and 1600 Common Pochards, 365 Tufted Ducks, 74 Red-crested Pochards, 17 Smew, 320 Mute Swans and others. In Durankulak Lake, despite the cold weather, the number of Pygmy Cormorants continues to be high. During the census we found 425 Pygmy Cormorants there.

Other interesting observations include a White –tailed Eagle at Durankulak, 35 Marsh Harriers in the area of the two wetlands and one Pallas’s Gull at Shabla lake.

The established number of Red-breasted Geese undoubtedly proves the great importance of our northern coastal lakes for the conservation of this very rare bird, threatened with extinction worldwide. According to recent studies almost 56 000 birds have remained in the world. Unfortunately, the hunting of waterfowl in the area of the lakes emerges again as a serious threat to the wintering Red-breasted Geese. On January 2 we registered again shooting at pure flocks of Red-breasted geese. The prevalence of Redbreasts compared to the huntable White-fronted Goose currently requires increased monitoring by the regulatory institutions and even prohibition of hunting in the region of the lakes. We plan our teams to be present in the region of lakes in all hunting days until the end of January, when the waterfowl hunting season ends officially by law. 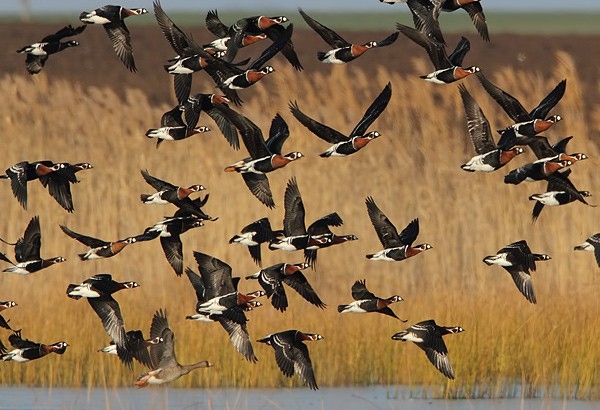